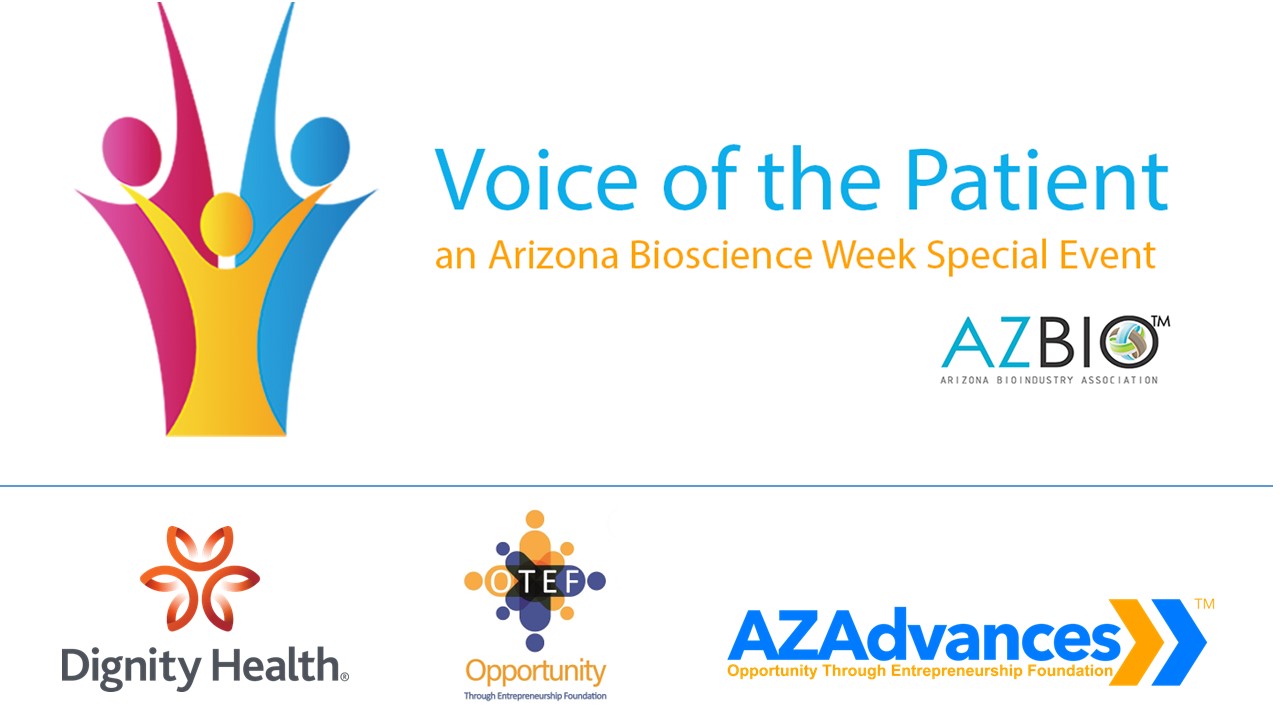 In our health innovation community, patients are the reason we do what we do

An Opportunity for All of Us:  Joan Koerber-Walker

AZAdvances founder, Joan Koerber-Walker, kicks off Voice of the Patient with Gabrielle Finley-Hazle of Dignity Health.

Rob Survick is a father of 2 kids and a loving husband to his wife, Missy. Additionally, he coaches men’s gymnastics and was coaching at the Youth Olympics when he realized he was experiencing loss of strength in his left arm. Today he is living with ALS and while there isn’t currently a cure for ALS, he is living life and optimistic he will get access to some promising treatments currently being evaluated.

Anni Foster is a mom and a cancer survivor. Foster has served as the General Counsel for Arizona Governor Doug Ducey since 2018 and has served in his administration since he assumed office in 2015. She has also served her community through organizations such as the Boy Scouts of America and her church. A native east coaster, Foster has made Arizona her home where she enjoys spending time with her sons and dog outdoors.

Andrea Tyler Evans is the Owner/Publisher of Frontdoors Media, the home of Frontdoors Magazine and The Red Book. Frontdoors Media is a print and digital publication company dedicated to celebrating the people and groups who give generously and work to build the future of our community. Prior to acquiring Frontdoors in 2017, Andrea was a strategic event planning consultant for 15 years. She is a graduate of Valley Leadership Institute and proud ASU alumni. Andrea volunteers with a number of Valley nonprofit organizations that help women, children and the arts. She is married to Tom Evans and mom to Thomas, Ellie and their rescue kitties, Sally and Shelly. Andrea is also a three-time survivor of esthesioneuroblastoma, a rare skull-based cancer.

Lena Spotleson is a native of Phoenix, Arizona. She was born and raised in central Phoenix and has been a high school basketball coach for 19 years. At the young age of 26, Lena was diagnosed with stage 4 cancer and was given a 25% chance of survival. She currently works for the American Cancer Society as the Director of Corporate Relations. She obtained her Bachelor’s degree from Arizona State University and a Master’s degree from Grand Canyon University in Education. Lena has been married for over 16 years and has no children. Her passions include volunteering for various cancer organizations and loves sports and traveling.

Jack Kavanagh & Barbara Kavanagh were just days away from their wedding, in May of 1991, when the couple got a frightening diagnosis. Jack has multiple myeloma, a rare and often misdiagnosed blood cancer of the bone marrow. Over their shared journey, with Jack as patient and Barbara as caregiver, they have worked together to meet life’s challenges to help others with their cancer journeys. In 2012, Barbara founded the Arizona Myeloma Network (AZMN) which works to support cancer patients and their families. Today this dynamic duo is on a mission to educate patients and their caregivers on the disease, and close the gap between ‘what they know’ and ‘what they should know’.

Learn about chronic disease from the patient perspective in this discussion with David Larwood (Moderator), Matt Nelson, and Dylan Peay. David Larwood was infected with the polio virus as a young boy but did not let the long-term effects of his illness keep him from pursuing his passions. Today, David is a participant in a study of patients experiencing the long-term effects of COVID-19. David is the CEO and Founder of Valley Fever Solutions, a company dedicated to developing new medicines to treat a disease that impacts the lives of too many Arizonans.. He is an experienced business executive with 19 years experience as VP or CEO. Matt Nelson is first and foremost a father to two wonderful daughters and a husband to a fantastically talented wife. Throughout his career Matt has held roles in the support of science, mostly in the neuroscience field and as luck would have it, has worked at Barrow Neurological Institute at St Josephs Hospital and Medical Center as a research operation manager for last 12 years. In February of 2016, Matt came home with facial numbness and didn’t think much of it. After a visit to urgent care, the ER a neurologist and finally an MRI, he was diagnosed with relapse remitting MS. Matt has been on disease modifying therapy ever since. This therapy is designed to inhibit the immune cells that are thought to target the neuronal myelin, from leaving the lymphatic system. Dylan Peay starts his story like this… “I had a clean bill of health until March of 2021. I awoke surrounded by paramedics and was informed that I had a seizure. I was released from the hospital but returned after I had another seizure that day. EEGs were normal and MRI showed nothing of major concern. Spinal tap results later revealed signs of MS and I was diagnosed and placed on infusion treatments although seizures were my only presenting symptom. I was later diagnosed with epilepsy after more seizures and have been on the journey to find the treatment combination to remain seizure-free.”

Navigating the Healthcare System from the Patient Perspective features a discussion with Francine Hardaway (Moderator), Chris Walker, Lena Spotleson, Taylor Hoffman. Francine Hardaway has been writing about healthcare topics for over 20 years including for Fast Company, Medium, and the US Health Crisis blog. She is a 3x entrepreneur who finally exited by selling a company to Intel. After her successful exit in 1999, Francine co-founded Stealthmode Partners, an accelerator for startups, and co-founded the Opportunity Through Entrepreneurship Foundation (OTEF) in 2005. Fast forward 23 years and Stealthmode Partners is still going strong. OTEF has partnered with AZBio to create AZAdvances, an initiative to support the creation of health innovations in Arizona. Today, Francine spends her time coaching entrepreneurs and investing in crypto, Web3, and healthtech. #changeisgood Chris Walker is a corporate executive, entrepreneur, husband, and GIRL DAD. He is also an active advocate for people living with Crohn’s Disease. In 2009, Chris was pursuing his dream of playing professional hockey and living the life of an elite athlete when something changed. He lost 90 pounds and ended up in the hospital. The diagnosis – Crohn’s disease. Researchers estimate that more than half a million people in the United States have Crohn’s disease and the numbers are increasing. Experts do not know the reason for this increase or what causes this autoimmune response. Taylor Hoffman is medical student at the University of Arizona College of Medicine – Phoenix. As a lifelong patient managing multiple autoimmune diseases, including Type 1 Diabetes, Taylor has used her experiences to influence policy, pass legislation, and teach advocacy insights. She was recently awarded the Primary Care Physician Scholarship for her focus on the voice of the patient in chronic disease management. Taylor has a Master’s of Medical Studies from the UACOM-P and graduated Summa Cum Laude from Arizona State University with a B.S. in Neurobiology, Physiology, and Behavior. Lena Spotleson is a native of Phoenix, Arizona. She was born and raised in central Phoenix and has been a high school basketball coach for 19 years. At the young age of 26, Lena was diagnosed with stage 4 cancer and was given a 25% chance of survival. She currently works for the American Cancer Society as the Director of Corporate Relations. She obtained her Bachelor’s degree from Arizona State University and a Master’s degree from Grand Canyon University in Education. Lena has been married for over 16 years and has no children. Her passions include volunteering for various cancer organizations and loves sports and traveling.